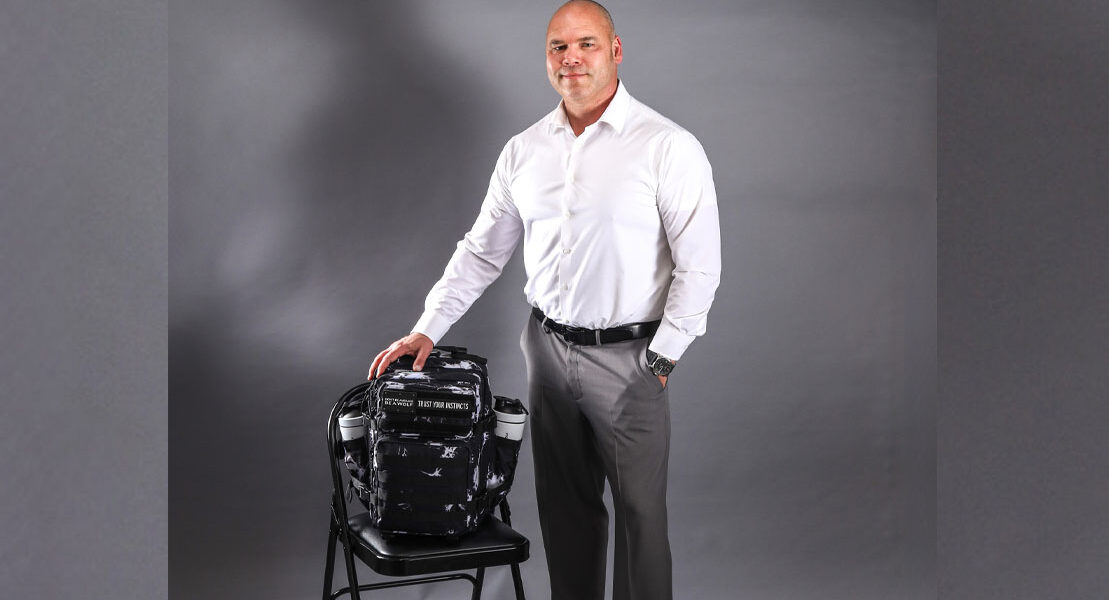 If you’ve been to a bodybuilding show or expo over the last few years, then you’ve likely seen athletes and fans alike carrying a WOLFpak on their shoulders. These unique backpacks with patches can be placed for personalization have been a big hit and are growing in popularity at a rapid rate. In the eyes of founder Michael Henderson, they are more than something to carry items in, they’re a form of expression and unity among a large group of people with like-minded goals. The people that carry his product proudly don’t even call it a “backpack.” It is in their eyes, something different – a WOLFpak.

“When they call the product by the product name, that has so much value, and I love seeing that play out because it gives me a sense of reward.”

Just like each person that carries a WOLFpak has his or her own story, the name has a story all its own. Henderson once thought of himself as a lone wolf. The husband of 26 years launched his company within the last few years, but the WOLFpak mentality that he lives by came when he and his wife were in a position to take on responsibility that they hadn’t planned on taking.

“At the age of 21, I had to adopt my sister. She was four years old at the time, and she was going through a similar path that I was going through at a young age, and I’d seen the outcome of that. I didn’t want her to see that be her outcome.”

Even though they were college-aged, adopting his sister put both Henderson and his wife on the fast track to becoming grown-ups. He credited that as a core moment of his character becoming developed. Henderson credited that time in part for his growth both personally and in business. He was quite successful in the auto industry when that mentality got tested again in January 2019 when he received a phone call from a doctor.

“The doctor called me and said he was going to deliver some news. He said ‘we don’t have hardcore evidence, but it’s highly likely that you have cancer,’” said Henderson. “When that news hits you, it shakes up your world.”

Michael Henderson was diagnosed with Stage III testicular cancer. That type of cancer was rare for a 45-year-old, which he was at the time. However, he looked back with regret at ignoring the signs that could’ve led him to looking into the issues sooner. He shared a couple of signs that he hopes others will consider in the future so they won’t find themselves in a similar position.

“I had groin pain, and I’d have lower back pain as soon as I would step out of a vehicle. Those are your lymph nodes that are inflamed and trying to tell you something is wrong.”

The cancer had reached his lymph nodes and spread to his chest. Henderson shared that his form of cancer was similar to what Lance Armstrong had to face. The unknown that came with that was what became his biggest concern initially.

“There was only one stage after that, and that’s not a good outcome. My family and my kids were the first thing that came to mind about that, and it stayed with me throughout all those weeks and months.

Leaving my wife of 25 years, not watching my daughters become women, and my newborn son become a better version of me was my biggest fear and my biggest challenge.”

“As a private person, I chose not to tell anyone outside of my internal family,” he said. That included his wife, two daughters, and his son. He also told a best friend, who came to be by his side. Henderson would keep working in his full-time career while going through chemotherapy treatments. Those treatments took five hours a day, and he had to undergo them five days a week. He offered a glance of how intense those treatments were that bodybuilding and fitness competitors could understand.

“Imagine the last couple of days of prep when you have no energy, you can’t think, you feel sick. Now, imagine feeling that way for 12 weeks. It’s like the final days of prep combined with Covid.”

Michael Henderson can make that comparison because he tested positive for Covid at one time as well. As for the treatments, he would go into the hospital for that day’s treatment at 6:30 AM, leave by 1 PM, drive in Los Angeles, California traffic for two hours to go to work, then he’d have to drive two more hours to go home. Rinse and repeat, day in and day out for almost one year. When asked about the physical changes, he credited a resolution diet. He rationalized his hair loss, which was already short, to shaving his head, and when he lost his eyebrows, his daughters and wife painted eyebrows on him in their place.

When he wasn’t working and driving, and going through chemo, he would sit in a tub of hot water during the evenings telling himself “it’s only a moment, it’s not forever), get what sleep he could on the couch, and get up the next morning. There was no motivation, only self-discipline on a daily basis to push through the treatments and daily responsibilities. On the weekends, he would sleep until Monday morning when it was time to start over. He followed this approach because he didn’t want to receive sympathy from those around him. He’d rather focus on preparing himself internally and rely on that inner lone wolf mentality to get through what was ahead and make progress each day.

“I was in a high-profile position with an automotive group that had ten locations. I hate to say it this way, but I felt like if I shared that, then some of my opportunities wouldn’t have been presented to me.

“The Lone Wolf” maintained his roles both at work and home while he fought his battle for a year against a foe that has taken many before him. As he was coming down the home stretch, he woke up one morning with pain, redness, and swelling in his neck. That was attributed to a blood clot in his jugular.

“The chemo created the blood clot. Nothing could be done due to the fear of it moving to a place they couldn’t get it. So, it’s still there today.”

Michael Henderson also explained that he would sometimes wake up dizzy, dealing with vertigo, Ultimately, he would emerge from the battle victorious, and he’s now cancer-free. Even in the midst of that struggle, he received something from it that serves him well to this day.

Those people that did know and support Henderson throughout the process made up the inner circle that he credited for helping him stay strong. He spent as much time as he could with them, and it was during those times that he realized he hadn’t done everything he wanted to do with his life, and he resolved to change that, effective immediately.

“I didn’t know what that meant or looked like right away. I just knew I didn’t like that answer.”

Henderson was very successful in his role with the automotive business, and he was in that field for 25 years, but he felt like there was more for him, and he couldn’t make his mark on life doing what he was doing in that field. While he was going through that physical battle against cancer, he was working through what making his mark would look like in his mind. He just knew that he wanted to leave behind something for his family to continue a legacy. So, he opted to create a brand.

Henderson used his four-hour plus driving time and any spare time he had to learn about how businesses like Amazon succeeded, and how brands were able to grow, making this a time of education for the future entrepreneur. He was also trying to come up with something different so he could stand out. When he was in a gym training, he noticed a basic black duffle bag, and things started falling into place shortly thereafter. He had his ideas of how he could make that bag better. He wanted to add pockets for books or a laptop, other pockets for devices and even compartments for food. Now, he needed a name. Having that WOLF mentality to get through the illness and his inner circle, his “pak”. Thus, WOLFpak was created.

Henderson felt a connection to the fitness and bodybuilding audience because he would go to the Arnold Classic every year. He knew that lifestyle, and he embraced it. The people that were in that community came together, and they had common interests. They also supported each other, like Henderson’s family, or his pak supported him. This would become his targeted audience as many from the fitness community have had challenges themselves. The next step was determining how he could stand out from the rest of the pack with his product.

“My daughters had these hydroflasks, and they put stickers all over them,” he shared. “I asked them why they did that because it bugged me. My daughter said that is what they do, it’s how they make it their own and how they express themselves.”

That was the answer Henderson needed. But, how do you do that with a backpack? He put Velcro on the front and started creating patches that could be added to them so each person with his or her own WOLFpak can express themselves in their own way.

The results speak for themselves because WOLFpak’s are sported by many fitness enthusiasts as well as some of the biggest stars in bodybuilding, such as 2020 Olympia 212 winner Shaun Clarida. You will likely see even more of them on full display at the 2022 Olympia Expo in Las Vegas, NV on the weekend of Dec. 15-18. Henderson and the WOLFpak will be there to meet and show support for all the members of the pack that align with their beliefs and mission.

That success is helping him establish a legacy that can be carried forward for generations to come. Not only do his daughters work for the company, but his younger sister does as well. His mission now is to inspire as many people as possible because he recalls the feeling of fear and discomfort that came through his battle with cancer. He hopes to help others create their own success stories by sharing his.

“There are athletes who touch people they never meet through social media, and they can pull people out of the darkness. I hope and believe this story will as well. I feel it’s my duty to share my story, especially if it can help someone else. I hope they do what I found worked for me. Trust your instincts. Make Your Mark.”