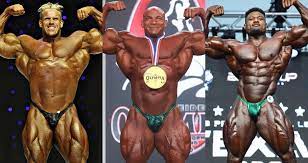 Jay Cutler thinks Andrew Jacked could be second only to Big Ramy.

In a recent episode of his podcast four-time Mr. Olympia champion Jay Cutler stated that he believes Andrew Jacked has the potential to beat everyone except Big Ramy. Cutler discussed the rising star with bodybuilding veteran Milos Sarcev.

There’s no doubt that Andrew Jacked has star potential. A newly minted IFBB Pro League competitor, Andrew has already claimed to major titles en route to the 2022 Olympia. Winning both the Texas Pro and the Arnold Classic UK has him on everyone’s radar. That’s including bodybuilding legends Jay Cutler and Milos Sarcev.

Trending
BMI vs Bodyfat: The difference between BMI and bodyfat in bodybuilding

In a discussion with fellow bodybuilding veteran and coach Milos Sarcev, Jay Cutler spoke on Andrew Jacked and his potential. In regards to his performance at the Arnold Classic UK, Sarcev was a bit let down by Andrew’s conditioning.

“WE WERE EXPECTING ANDREW JACKED TO JUST DOMINATE BECAUSE WE AGREE, HE’S SPECTACULAR, HE HAS THE SHAPE, NO ONE CAN TOUCH HIM,” SAID SARCEV. “HE WAS 100 PERCENT HERE, AND ONLY 70 PERCENT IN TEXAS. SO OUR EXPECTATIONS WERE, ‘OKAY, WE’RE GOING TO SEE AN ALIEN COMING TO THE EARTH.’ THEN, HE SHOWED UP — STILL  WON HANDS DOWN IN MY OPINION. BUT CONDITIONING LEFT SOME QUESTION MARKS.”

some great potential in Andrew Jacked. Cutler believes Andrew has what it takes to make a serious run at the top of the division.

“I WAS EXPECTING MORE. IF THAT MAKES SENSE. IN NO WAY IS THIS TO DISCREDIT WHAT HE’S ACHIEVED OR HOW HE LOOKS BECAUSE I’LL SAY IT RIGHT OUT, THIS GUY, IF HE ACTUALLY GETS IN THE SHAPE THAT EXPECTATIONS ARE… I THINK HE CAN BEAT EVERYONE BUT RAMY,” SAID CUTLER. “BECAUSE OF HIS STRUCTURE, LISTEN: THE WAY HE STANDS IN A RELAXED SHOT – HIS FRONT LAT SPREAD – I MEAN THE FRONT DOUBLE, LIKE HE’S GOT EVERYTHING.”

Andrew Jacked Versus The World

Jay Cutler and Milos Sarcev also discussed Andrew’s chances against fellow top flight competitors like Nick Walker and Hadi Choopan. Despite thinking he has a great chest, Sarcev was underwhelmed by Andrew’s conditioning.

“ANDREW HAS ONE OF THE CRAZIEST CHESTS I’VE EVER SEEN, BUT HE’S GONNA HAVE A PROBLEM [WITH] CONDITIONING BECAUSE HE DOESN’T HAVE THE DETAILS,” SAID SARCEV. “EVEN RAMY HAS IT TO A CERTAIN DEGREE NOW, SO WHO IS HE GOING TO STAND NEXT TO THAT HAS ALL THAT, NICK [WALKER]?”

Jay Cutler also compared Andrew Jacked to 2019 Olympia champion Brandon Curry who he believes remains top of the food chain. Cutler also agreed that Nick Walker would be a major threat as well as Hadi Choopan.

“NICK WALKER’S BACK DOUBLE IS INSANE, AND HE’S GOING TO PLACE SOMEWHERE IN THE TOP THREE,” SAID CUTLER. “I STILL THINK BRANDON BRINGS IT, RAMY BRINGS IT, AND HADI BRINGS IT, SO I THINK EXACTLY YEAH. I CAN’T DISCREDIT BRANDON BECAUSE I THINK HE’LL [ANDREW] HAVE A HARD TIME WITH BRANDON, BUT I DON’T THINK I WILL GIVE UP ON BRANDON YET. I WOULD LIKE TO SEE BRANDON AND ANDREW NEXT TO EACH OTHER.”

Do you think Andrew Jacked has the tools to break into the top six at the 2022 Olympia?