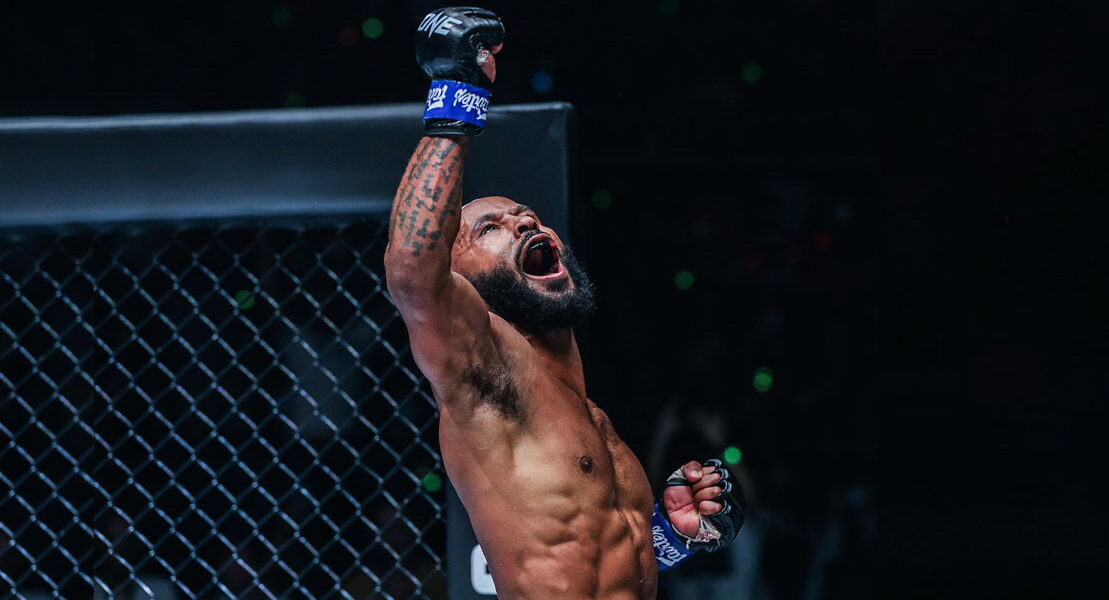 Demetrious Johnson (31-4-1) is back on top after avenging his loss against Adriano Moraes in April to claim the ONE Flyweight championship in August. At 36 years of age, “Mighty Mouse”, who was the first ever UFC Flyweight Champion and is one of the most exciting fighters on the circuit, had it all to prove when a thunderous knee to the face spelled the end during his original challenge against Moraes. The rematch would take the form of poetic justice however, with Demetrious Johnson delivering his own big knee to revive his career and add another chapter to his stellar career.

M&F sat down with the lightning-fast fighter to find out more about his sporting background, his attitudes toward nutrition, and the “zombie” training that sparked his championship hopes back to life.

You are so quick in the cage. You ran track and did a lot of sports while growing up. Do you think this helped with your explosive power?

When I was in high school I did all types of sport. I did football, cross country, track, I even played basketball when I was in middle school. The biggest one was wrestling. With track, I did long distance; I did 1,600m and I did 3,200m so I think that’s what equates to my cardio being so good. My fastest mile was 4 minutes and 32 seconds at a time when I was right in high school, so I’m able to push the pace, so I can still be explosive even when I’m 3 or 4 rounds into the fight.

Fighters take many different approaches to nutrition. What are your preferences?

I follow my wife. It’s called eating the rainbow (laughs). What that means, is that every meal that I have, I always try to have a fruit, a protein, a green, and also a carbohydrate. So, in the morning, I typically don’t eat any greens because I’m not a fan of eating salad in the morning but I’ll have a gluten free oatmeal with some almonds in it and then I’ll have eggs with a little cheese, and then I’ll have chicken sausage so that I’m getting that wide range. I’ll have yoghurt as well. For the next meal, I’ll try to do the same thing, besides the yoghurt. The next carbohydrate will typically be brown rice or quinoa or sweet potato and then you have your sautéed spinach. Spinach is the only type of green that I really like to eat. Broccoli, cauliflower, brussels sprouts and all that kind of stuff bloats me. My form of protein will be chicken, steak, game meat. I’ve tried to stay on that cycle throughout my whole adult athletic career and it’s been helping me out, not missing weight at all.

That sounds like a much more sustainable plan than going on a crash diet!

Yeah, one thousand percent, I think a lot of people go on these fads when it’s all about the lifestyle. At the beginning of the year, you’ve got gym memberships up and then after 2 months it’s back down, so for me, I think the way I eat is a lifestyle. Obviously I splurge, last night I had lasagne so when I look at a lasagne I don’t see it as fattening, I see it as my carbohydrate, I got my protein with the beef, I’ve got veggies and whatnot, and I’m a very active person, so it just works out well for me. Sometimes, I’ll do intermittent fasting for 12 hours, which I feel is a natural way of fasting.

Where are some of the places that you like to train?

I see my main coach, Matt Hume for all my disciplines, but with being with Matt for so many years, now we are just trying to execute on what we need to do to get the job done in the fight. With me joining GRPL Club, with professor Yan (McCane), that’s for all the Brazilian Jiu Jitsu grappling. I have 2 hours of guided, instructional grappling. This is how it was when I first started training at AMC [Kickboxing and Pankration]. Also, you got your normal gym and when I’m in Arizona, I go to Arizona Combat Sports.

You held part of your fight camp in Arizona before facing Adriano Moraes. How was that?

I spent two weeks out there, in Arizona, just to get away and break up the monotony of staying home and doing training camp. You know, I’m 36 now. I feel like I’m pretty responsible. When I get ready for these fights if I don’t do the work I need to do, I’m only cheating myself, because at the end of the day, I need to get in the cage and fight, not my coaches.

A big aspect of your training this time was to keep moving forward while taking shots. You called it “Zombie Training.” In the first fight against Moraes, you were stopped with a brutal knee. Was this method of training a way to prepare you for this; both physically and mentally?

Yeah, one thousand percent. We sat down and we looked at it, and we decided that we still thought the best way to go about beating Adriano was to just walk forward, fighting. And I feel like in all of my fights I just come forward and try and put pressure on somebody, try to get the clench on them, wrestle a little bit, and that’s what we tried to implement in this fight against Adriano. It’s the same thing we did in the first fight, we just fixed a couple of things. So, for me, I just named it “zombie.” You know, the ‘Korean Zombie’, Chan Sung Jung, he did it very well, he would just walk forward and take so many shots and I was willing to take a lot of shots this time.

There seems to be a lot of momentum behind ONE Championship thanks to the new deal with Amazon Prime Video. What are your thoughts on this?

With ONE Championship being on Amazon Prime Video, it’s just another way for fans in the United States to get introduced to the beautiful art that’s going on in Asia, so fingers crossed they come to Europe, and double fingers crossed that they come to America, and we are going to keep on putting on great fights.

2023. Hopefully the first quarter. That’s my goal, obviously I’m still healing up. I’m almost one hundred percent healed I think, and I’m gonna start training next Monday, get my body back into it, and start lifting and get the cardio where it needs to be, and we’ll see what happens. We’ll see what One Championship brings us.

ONE returns to Prime Video featuring a huge main event as Angela Lee takes on Xiong Jing Nan for the Women’s Strawweight Title, streaming live in the United States and Canada on Friday, Sept. 30 at 8 p.m. ET. For more information Click Here!